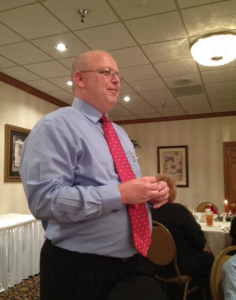 How did you get started with AZOR? Evan’s Office Supply was purchased by AZOR in Jan of 2014.

Tell us about your work experience. How did you get into this industry?

“I got in this industry in 1992 based on the recommendation of a friend. I Started in Kansas City and began in the warehouse. Next I became a delivery driver and furniture installer. Then, I became the warehouse supervisor and then was moved to customer service. Finally, I joined the sales team and later became sales manager. Eventually, I became the President of Evan’s Office Supply until it was purchased by AZOR.”

Over your career, what philosophies have you developed?

“I am a good listener and I really want to hear people out. I also believe in the Golden Rule; simply treat others as you want to be treated.”

What are your strengths?

“I love people and build relationships quickly. I’m upbeat and positive and easy to get along with. I also have a “can do” spirit and believe when something needs to get done that everyone should pitch in and help.”

What are your weaknesses?

“I believe that the customer is always right, but sometimes have a difficult time telling them no. This can put me and the company in a tight spot from time to time.”

What’s your favorite thing about what you do?

“People… I love people. I can strike up a conversation with anyone.”

What advice would you give to all new team members?

“This company is full of great people and has many wonderful opportunities. I believe this is the best time to be in this industry in the last 15 yrs. Go build lifelong relationships.”

With your current knowledge and wisdom if you could go back in time and speak with a 20 year old Todd Coffey, what advice would you give yourself?

“Be more financially sound. You can’t take advantage of great opportunities if you don’t have the money to do so.”

Tell us a Todd Coffey Story

“I’m brand new into sales and I stop by this big manufacturing facility that I’ve unsuccessfully called on a couple of times. I get to meet with the big boss and he’s so excited. He said to me, “I’m SO glad you’re here.” Well at this point I’m pumped and I ask him how I can help him. He says, “Do you sell signs?” I said, of course we do, what kind can I get you? He replied, “One much bigger than I have on the front door that says NO SOLICITING!!!”

What is something people would be surprised to learn about you (special talents, travels, skills, hobbies, etc.)?

“I was in the US army for two years, Stationed in Honduras. I have caught a shark and have eaten an iguana.”